The Cleric huffed and sweated, he swung radiant slayer around his head, balanced on his bare feet against the polished wooden floor, he crouched and executed a neat jump with the sword held in a stabbing motion. feeling amazingly light without his armor which was carefully stacked in the armory next door the cleric continued to train for a few more marcs.

The sight of Radiant Slayer once again in motion reminded him of a recent occasion. Trying to comfort a guild sister very upset over the loss of one of the guilds founders the Cleric had taken her to the memorial garden in the Western Mountain. The cleric was sure he had once visited but recently stumbled across the place again, the statue of Julia there reminded him of his goal and made him realize he had yet to tell the story of the naming of his blade.

It was many many marcs ago and with the advice of many great names echoing in his ears the cleric had reached level 30 and had to choose the weapon that would see him through his next levels of training and the long gathering of materials for his Ultimate Weapon.

Islander had suggested a rapier, Dagobert the lance but the Cleric had long desired the simple and powerful broadsword. It may not be as quick on the attack or as strong on the defense as the others but long practice with his old battle hammer ad strengthened the Clerics arms, shoulders and back muscles.

The blade was also the most expensive of the three but crystal hunting a generous guild mates ensured the clerics purse could afford the broadsword. At this time Krasus the Weapon Tinkerer still sold items to modify weapons but the cleric didn't know which options would be best to use. Sylent One the Oathkeeper, mighty cleric and weapons artist had already offered to help, they arranged to meet in the Dundee Inn to discuss which would be best.

While there the Radiant Goddess Julia descended and even deigned to speak to them both, after smiting the unworthy present she blessed those others with a godly blessing. Sylent and I raced to the Milltown hut where she generously bought and applied a swiftness ointment and sharpening stone before heading of to use the blessings for training. I hurried after her but not before she named the blade 'Radiant Slayer' and handed back into my hands.
Korba posted @ 09:48 - Link - comments (1) 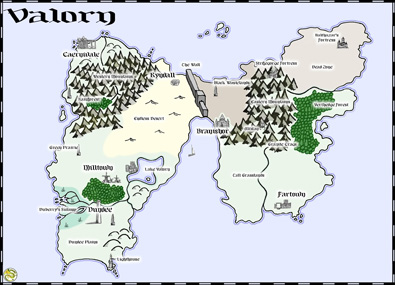 After so long and with a great amount of help from Purazon the map of Valorn once started with Maji was finally finished.

After the completion of the project the Cleric decided a spot of relaxation was in order, first a few drinks and the new sport of leather hat racing on the river near Caernivale. The best of three race was won by Jessa and having a choice decided to make the Cleric tell a story, with Jezzara and Azure for company they moved to the Upper pub in Caernivale where the cleric told the following story based on a story he had once heard:

A long long time ago when Valorn was a more peaceful place the village of Caernivale was built lower down on the beach and the rolling hills surrounding it where covered in fields of Wheat. One of the wealthiest men in the village was an old man called Harthor who owned many of the fields. One day at the end of a fine summer Harthor was surveying his fields and the ricks of corn all stacked up with his grandson Tom.

Now Harthor had the sense that comes from living to an old age and when the earth began to shake and buckle he was not overly troubled as Valorn suffered from numerous small earthquakes then as it does now. But when the sea began to race away from the beach he was worried and even worse the rest of the villagers where all lining up on the beach to watch this strange occurrence.

Harthor called to Tom and said Ã¢â¬ÅQuick boy, run and get me a burning torchÃ¢â¬Â. Tom quickly returned and then watched in horror as his grandfather began to set fire to all of their families ricks.

Down in the village the smoke was seen, fire was a common enemy and the villagers raced into action. Grabbing buckets an brooms they where as busy as little ants working to extinguish the flames. At last they came to the final fire and found little Tom is tears, they asked Ã¢â¬Åwho started this fire?Ã¢â¬Â. Tom answered Ã¢â¬Åmy grandfather Harthor did, heÃ¢â¬â ¢s gone mad and we will all starve!Ã¢â¬Â.

At this moment Harthor returned and spoke to the villagers Ã¢â¬ÅdonÃ¢â¬â ¢t worry young Tom lookÃ¢â¬Â he pointed out to sea and they all looked in horror as the sea returned as a huge wall of water. Standing safe on the hill they could do nothing as the giant wave washed the village away without a trace.

Despite the wave Harthors actions had saved the villagers, fresh grain was brought from Miltown and the town was rebuilt on stilts high above the beach incase another giant wave ever comes again.
Korba posted @ 05:37 - Link - comments (1)
039044 visitors